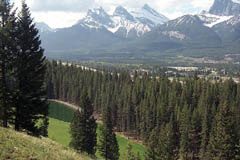 Canmore is best known for the Canmore Nordic Centre, the host of the cross country and biathlon events in the 1988 Winter Olympic games. It is also known for the cheapest gas between Calgary and Vancouver (no BC sales taxes, no National Parks rents) and lots of hotel rooms and restaurants close to the Trans-Canada Highway and close to Banff’s natural beauty. Canmore has not just lots of hotel rooms, but many fine restaurants, and lots to see and do in and around the town site.

Canmore was named in 1884 by the Candian Pacific Railway, likely at the suggestion of Lord Strathcona, in honour of Malcome III Canmore who was king of Scotland from 1057 to 1093. The community officially became a town in 1955.

There are major attractions, golf courses, and resorts in the area at Silver Tip, Three Sisters and Spray Lakes. Building restrictions in Banff limiting the development of residences, commercial offices and stores, and accommodations has caused Canmore to boom recently, though it recently imposed its own restrictions to maintain the town’s un-commercial charm.

Many people working in Banff actually live in Canmore and commute into town, not only for the lower cost of living but also for its quiet, relaxed, un-touristy feel. The stores and services on Main Street (8th Street) are focused on servicing the town’s residents not visitors. The town has a very liveable feel to it. There is now even a commuter shuttle bus between the two communities.

Canmore is nestled on the eastern edge of the Rockies, on the northern end of the Kananaskis range, and has its own micro-climate. It is in the rain shadow of the Rockies and on the start of the Chinook Belt. It receives 47 cm of rain (19 inches) per year, and receives very little snow accumulation. 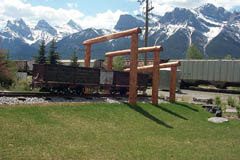 From 1902 until 1930, Canmore was inside the boundaries of Banff National Park. The town was first settled in 1883, as the CPR inched across the land, and is named for Malcolm Canmore (‘ceann’ means head or chief and ‘mor’ means great) who became King Malcolm III of Scotland who lived from 1031-1093* This town began as a coal mining town the coal being used to fire the boilers of the steam locomotives and for home heating. After the discovery of oil in Turner Valley in 1914, coal prices began a slow but steady decline. Most of Canmore’s mines had closed by 1922, though one seam at the Mineside mine continued to be extracted until 1979. Canmore today shows very few signs of its industrial past, though the Stewart Creek Golf Course at Three Sisters showcases several mine shaft entrances on its fairways. 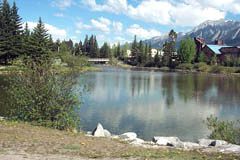 Feature films that need wilderness are regularly being shot around Canmore. Recently, “The Edge”, starring Anthony Hopkins, Alec Baldwin, and Elle Macpherson –as well as Bart the Bear. You’ll see the star’s autographed posters in the bars and restaurants around town that they frequented (except the bear’s). 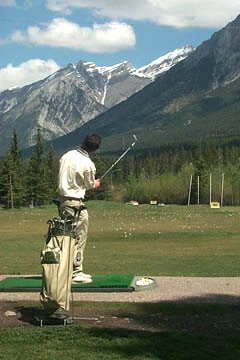 Canmore now has three golf courses for those who wish to enjoy nature at a leisurely pace. Here are some other attractions in and around Canmore:

The town centre is nestled between Policeman’s Creek and the Bow River, with many scenic pathways running alongside the waterways. The streets in this area are numbered, and 8th Street is also Main Street. Main Street is the heart of the community, with many stores, services, and restaurants to service the local community. To the north end of town is beautiful Lion’s Park, and the Canmore Golf & Curling Club and the town’s Recreation Centre. 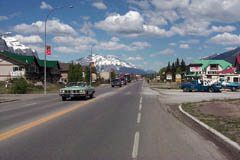 On the east bank of the Bow River, nestled between it and the Trans-Canada Highway is Motel Alley. Most of the town’s hospitality industry is centered on both sides of Bow Valley Trail (Highway 1A). This area also has a number of restaurants, and service stations.

On the northeast side of Highway 1 are a number of residential communities including Elk Run, Cougar Creek, Benchlands, and SilverTip. To the extreme northwest of Canmore, just before the Park Gates is the community of Harvie Heights, with a residential neighbourhood on the hill overlooking the better-known strip of motels.

West of the Bow River are the communities of Rundle, and Three Sisters, leading up the slope to Spray Lake. This area has most of Canmore’s attractions. [ Spray Lake-Three Sisters]

Built in 1893 as an outpost for 2 men and their 2 horses. It is the last remaining purpose-built barracks still standing in Western Canada. It became a private residence in 1929, but in 1989 was restored back into its historical condition.

This museum, on 7th Avenue, houses 100 years of Canmore history in photos and artifacts, including memorabilia of the 1988 Winter Olympic Games.

This hotel was built in 1890, and is the second-oldest standing hotel in Alberta. It was converted to a hospital during the 1918 Influenza Epidemic, and almost closed down during the prohibition.

This church was built in 1891, one of the first Presbyterian missions in Alberta. The church’s founding Reverend, Charles Gordon was a strong advocate of the League of Nations and penned 35 books under the name of Ralph Connor.

From the Canmore Municipal heliport, you can take one of several tours of the Rockies as well as trips to the tea house at the top of Mount Lady Macdonald.

King Malcolm was the son of King Duncan I and after his father was killed by Macbeth (in 1040 in Forres,
Morayshire) he went into exile in Northumberland. In 1057, with the support of the English King, Edward the Confessor,
he defeated and killed Macbeth at Lumphanan in Aberdeenshire. Though Lulach, Macbeth’s stepson, took over the throne
he was killed the following year by Malcolm, who founded the dynasty of the House of Canmore which
would last 200 years, until the House of Stewart.

When driving eastbound along the Trans-Canada, take the first exist to get out for “Gasoline Alley”, for the cheapest gas since maybe Revelstoke. This street also has a TON of motels, restaurants and convenience stores. When you get to Benchmark Trail/Railway Ave, turn right (south) into downtown, which is a pedestrian-friendly shopper’s paradise selling “stuff for locals” not “trinkets for tourists” like Banff’s Banff Avenue. For westbound visitors, exit the THIRD Canmore exit to access downtown and Gasoline Alley.

If you get off the Trans-Canada Highway here and take Highway 1A into Calgary, via Cochrane, you miss the heavily-trafficked section of the highway, and you trade off some views (Tom Scott Hill looking west) for an unusual south-facing view of Lac Des Arcs, and passing by the Ghost Lake recreation area. The 1A route is mostly level (unlike the up and down Trans-Canada Highway route), until Cochrane. Stop for ice cream at MacKay’s before taking on the 3 kilometre long Cochrane Hill, which is a local hang gliding hotspot, followed by a nice gentle downhill along Crowchild Trail into Calgary’s downtown. Westbound cyclists have a slow but steady climb up Crowchild Trail, and a joyfull downhill ride into Cochrane (and a stunning panoramic view) should grab their ice cream as sustenance before the long ride into Canmore, with few shopping options in between.

We and our partners use cookies to better understand your needs, improve performance and provide you with personalised content and advertisements. To allow us to provide a better and more tailored experience please click "OK" Privacy policyOkNo