From 2009 to 2014 the area from the Golden junction was improved with 4-laning, median barrier, improved drainage, wildlife fencing and crossing (though not as fancy as in the National Parks), re-vegetation, retaining walls, grade reduction, access consolidation, an overpass at Golden Donald Upper Road (location of the Golden Visitor Center), cyclist/pedestrian pathway and Intelligent Transportation System signs. The project to widen and straighten the Trans-Canada Highway to 4 lanes with a design speed of 100 km/hr, involved 21 kilometres of improvements costing $327 million 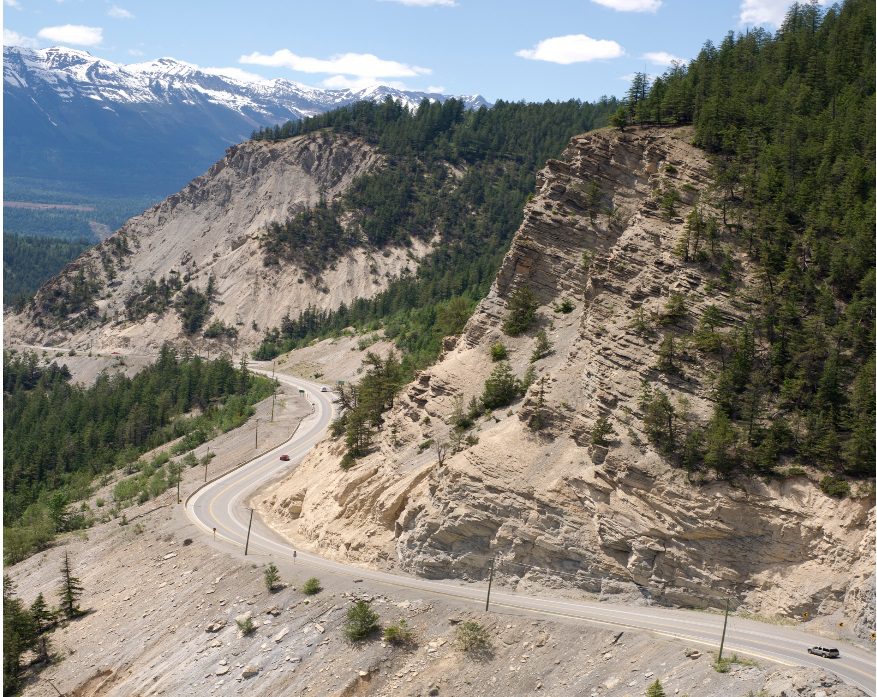 Kicking Horse Canyon Phase Four, at an estimated cost of $450 million will involve a significant realignment of more than four kilometres of the Trans-Canada Highway through the Kicking Horse Canyon to improve traffic operations, safety and reduce rock fall and avalanche hazards.

This dangerous stretch between the Kicking Horse Visitor Centre and the Ten Mile Hill east of Golden has many sharp curves and a reduced speed limit of 40 km/h in sections. 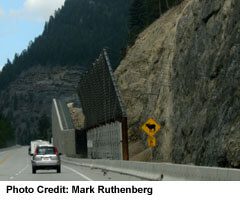 The elegant curving 405 metre Park Bridge the highway travels on today  was opened in 2010, and passes through an impressive 90 metre rock cut as deep as the canyon the bridge crosses over. The former route of the Trans-Canada Highway, way below and alongside the Kicking Horse River is now a recreational trail for hikers and cyclists, ending at a viewpoint on the site of the former Park Bridge.

If you stop at the Rest Stop and Tourist Information at the bottom of the hill, you can look east toward the Park Bridge and see the old highway route in the Kick Horse River valley below the bridge. And you can see the trans-continental railway tracks just across the river (trains typically come by every 1/2 hour).

Field and the Visitors Centre 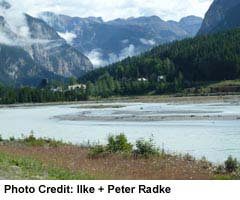 The town of Field, with lots of services (there’s a convenience store right on the Trans-Canada, across from the Alberta Travel Information Centre (with BC info as well). Just west of Field, on the north side of the highway is the exist for Emerald Lake (sorry, in the summertime, you need both parking and bus reservations long in advance to get to the Lake itself, as well as accommodation reservations if you wish to stay there!).

East of Field you have a very wide valley and  the highway seems surprisingly low above the riverbed, given what you may think is Spring flood stage… but remember, (a) its a very wide valley, and (b) they’ve been monitoring the Spring runoff for 150 years, and (c) the road bed is not as low as you think!

East of Field, as the highway starts its long climb up, you see the railway tracks across the valley, already higher than the highway, and they will pass through concrete avalanche tunnels and you will see a wide avalanche path, with the sides protected by high concrete embankments  to steer avalanches away from both the highway and the railway. 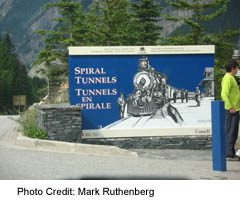 This pass was discovered in 1858 by Dr James Hector, a geologist of the famous Palliser Expedition to map and explore western Canada for the British government. He was said to have received a disabling kick from one of his pack horses, and name the pass for the incident.

When the Canadian government, under its terms of union with British Columbia, agreed to build a trans-continental railroad, they chose the Kicking Horse Pass as the shortest route to the Pacific. The railway climbed up the east slope, from Lake Louise, and dropped down the west slope. 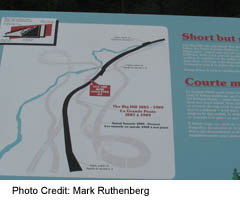 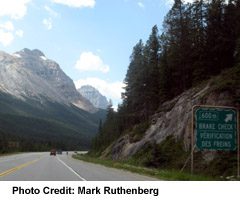 The track was also too steep for safe braking, and there were accidents (a few!). The CPR added three safety switches (runaways) on the way down to protect against runaway trains. In 1907, the track grade was modified with two spiral tunnels, one 3200 feet long and one 2800 feet long, which were cut through Mount Cathedral and Mount Ogden, and dropped the slope down to 2 percent.

The steep pathway of the abandoned track is now the roadway for the Trans-Canada Highway. You can see an abandoned bridge to the south side of the highway just east of the Spiral Tunnels.

Visit the Spiral Tunnels on your westbound leg, if possible, the left turn from the eastbond lanes in summer is not an easy one in traffic. When you continue westbound you may see a train above you to the left/south, heading back into the mountain to approach the Spiral Tunnels from above!

As the highway reaches to the top of the Kicking Horse Pass, you will pass three small lakes on the south side west of the border, and one east of the border. Just east of the first of the lakes you will pass under  an unusual animal bridge, that spans all four lanes of the Trans-Canada… this is unique because, further east in the scenic Bow River valley, you will pass under several animal bridges but their arches span 2 lanes of roadway at a time with the earth, bushes and trees on top span the whole roadway to provide the wildlife a comfortable and safe way to cross the highway.  The pass is marked at the Alberta-BC border by large signs (many folks stop and take pics in front of them, but be observant of the busy traffic at this point).