New Brunswick is a small province with a wide range of scenery: the St John River in the west, the Fundy shores and ties in the east, and the Northumberland Straits looking across to PEI in the north. The province is also famous for its many covered wooden bridges, the longest in the world located at Hartland.

Here is the route of the Trans-Canada Highway from east to west: 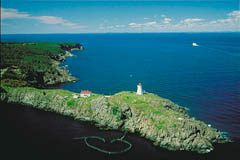 In New Brunswick, the Trans-Canada Highway (known here as the #2 Highway) runs 523 km though the province and passes through several cities and two-dozen towns, moving travellers from Nova Scotia (and PEI) to eastern Quebec.

The New Brunswick port of the highway is “twinned,” providing four lanes of driving along its entire length. The highway starts at Sackville, on the Nova Scotia border and then passes through Moncton.

After leaving the Bay of Fundy tidal lands (the Fundy National Park — with its 50 foot/13 metre tides — is a worthwhile detour to the southeast), it turns southwest before on an overland route and crosses the Saint John river to Fredericton, the provincial capital, The Trans-Canada continues up the length of the Saint John River to the Quebec border.

Kings Landing Historic Settlement (a few minutes north of Fredericton at Exit 259), is a living history museum of early rural life in New Brunswick, showing the pioneer life of the Loyalists, who were refugees from the American Revolution.

The area north of Frederictonis known as “the Rhine of North America,” and in Hartland, the river is crossed by the longest covered bridge in the world (covered bridges were invented in new Brunswick to prevent snow build-up on bridges). The highway goes past several charming towns like Florenceville, and Grand Falls. The highway leaves the province just north of Edmunston in the northest corner of the province.

The highway has a number of convenient exits (depending on direction of travel) to the province’s biggest city, Saint John. Saint John is the location of the famous reversing falls at the mouth of the Saint John River. 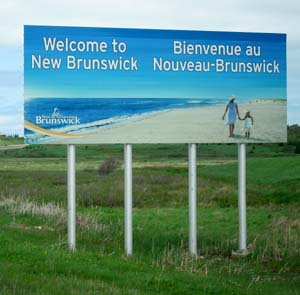 To travel the Trans-Canada route to Prince Edward Island, take Highway 16 at the Nova Scotia/New Brunswick border, and drive 36 miles to the new Confederation Bridge, opened in 1997 (you pay a toll when you leave PEI).