[vc_row][vc_column][vc_column_text]Take Route 30 (commonly known as Logy Bay Road) north to Logy Bay, today a centre for scientific investigation. It is the location of the Ocean Sciences Centre where a program of continuing oceanographic research is being carried out in an effort to learn more about the ocean habitat that surrounds the province. The laboratory is part of Memorial University of Newfoundland. Guided tours of this fascinating facility are regularly conducted. The most popular attractions are the seals. 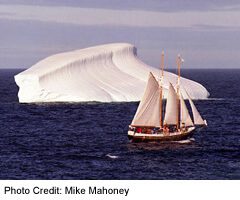 Continuing on Route 30, turn off onto Marine Drive, a scenic route that winds in and out of the small communities along the Tor Bay coastline. Torbay was likely named by Devonshire fishermen after a place of the same name in England. This is one of the best points on the east coast of the island for photographing or viewing the Atlantic seascape. Along the way you can visit Logy Bay. In Newfoundland ‘logy’ means heavy, dull or sluggish, which described the fish caught in this cove, and thus the name – Logy Bay.

In the last century an enterprising St. John’s doctor tried to establish a health spa here. Dr. Kielley sent a sample of the waters of a Logy Bay spring to Britain for analysis, which revealed that it contained definite minerals with presumably medicinal properties. The chalybeate spring with nine chemical ingredients was said to equal the famous German spas’ curative effects.

Marine Drive also passes through the communities of Middle Cove and Outer Cove, named for their positions along the coast. The elevated cliffs, exposed beaches and wild seas that this coast is famous for are visible from a number of excellent highway vantage points and seaside parking facilities. This area easily rivals any highway tour in eastern North America for scenery. During late spring and early summer, it’s a good area to see icebergs, and during the winters when Arctic ice drifts south to these waters, the ice stretches to the horizon.

This seacoast has ovefr the past 500 years roving buccaneers as well as the English and Irish ancestors today’s area residents. Torbay was important militarily in 1762 when British forces under Colonel Amherst landed at this village to retake St. John’s from the French army that had captured it. The British landing at Torbay outflank and overwhelmed the French.

Another community just up the coast us Flat Rock, which was settled before 1680, and is named for the flat rocks around the cove which made ideal places to dry salt cod. The Flat Rock Grotto, a shrine to Our Lady of Lourdes was blessed by Pope John Paul II, and is the largest religious shrine of its kind east of Montreal.

Heading northwest on Route 20 is Pouch Cove, pronounced “Pooch” Cove, one of the oldest settlements in Newfoundland. The earliest documented date of its settlement is 1611, only 28 years after Sir Humphrey Gilbert claimed the island for England. Pouch Cove’s dangerous harbour was the primary reason for its early settlement, paradoxical because in the early days permanent dwellings were forbidden by both French & British law in the 17th and 18th centuries. A dangerous harbour kept away Royal Navy ships enforcing the law, as well as pirates. In 1875, the Waterwitc ran aground in a storm with 25 people aboard and a courageous resident, Alfred Moores, performed a daring rescue by being lowered by rope from an overhanging cliff to rescue 11 of the people on board.

At the end of Route 20 at Pouch Cove, a rough but passable road leads to the rugged headland of Cape St. Francis. During the fall, this is a good area to pick blueberries and partridge berries. Cape St. Francis is marked on one of the earliest maps in existence, a chart from 1527. It is believed to have been named by the Portuguese explorer Gaspar Corte-Real during his voyage to Newfoundland in 1501.

The artifacts depict the history of this small outport community, one of the oldest settlements on the Avalon Peninsula. Spectacular scenery is an extra bonus for the visitor.

The museum is divided into five themes representing different aspects of the community’s heritage. Fishing, Agriculture, Lifestyles, Military and Sports. Come and enjoy a unique look into our proud and colourful past.
[/vc_column_text][/vc_column][/vc_row][vc_row][vc_column][vc_gmaps link=”#E-8_JTNDaWZyYW1lJTIwc3JjJTNEJTIyaHR0cHMlM0ElMkYlMkZ3d3cuZ29vZ2xlLmNvbSUyRm1hcHMlMkZlbWJlZCUzRnBiJTNEJTIxMW0xOCUyMTFtMTIlMjExbTMlMjExZDQyOTk1LjIwODg2OTU0MzclMjEyZC01Mi43ODQyNTE2NTc4Nzg4OCUyMTNkNDcuNjYxMTAwMTk1OTEzNjU0JTIxMm0zJTIxMWYwJTIxMmYwJTIxM2YwJTIxM20yJTIxMWkxMDI0JTIxMmk3NjglMjE0ZjEzLjElMjEzbTMlMjExbTIlMjExczB4NGIwY2E2MzIyYTVkNmY1NSUyNTNBMHhhNTg1NTA3NGI0OTM1MzM0JTIxMnNUb3JiYXklMjUyQyUyNTIwTkwlMjE1ZTAlMjEzbTIlMjExc2VuJTIxMnNjYSUyMTR2MTU4MTg5NjAxOTkxNiUyMTVtMiUyMTFzZW4lMjEyc2NhJTIyJTIwd2lkdGglM0QlMjI2MDAlMjIlMjBoZWlnaHQlM0QlMjI0NTAlMjIlMjBmcmFtZWJvcmRlciUzRCUyMjAlMjIlMjBzdHlsZSUzRCUyMmJvcmRlciUzQTAlM0IlMjIlMjBhbGxvd2Z1bGxzY3JlZW4lM0QlMjIlMjIlM0UlM0MlMkZpZnJhbWUlM0U=” title=”Torbay Newfoundland Area Mao”][/vc_column][/vc_row]