The Barrie Orillia region has a number of great recreational trails.

Springwater Township
For road access, take County Rd. 90 to Grenfel Rd. Travel 5 km north.
An alternate route is George Johnston Rd. off either County Rd. 90 or Hwy 26, then go west on Portage Trail for 3 km.
Fort Willow historical site and conservation area sits on a promontory overlooking the Minesing Swamp, and is
part of the historical Nine Mile Portage used during the War of 1812.

A 220 km trail throughout Simcoe County (100 km currently open for use). The section closest to Barrie is the “North Simcoe Rail Trail”.
Barrie’s Waterfront Trail is also considered part of this trail. Approximately 20 kilometres of Trans Canada Trail is planned to pass through the City of Barrie. The trail in Barrie connects to the Township of Springwater in the northwest and to the Township of Innisfil in the south.

The trail passes through the rolling moraine hills of Oro-Medonte Township, past Horseshoe Resort, crosses Hwy 400 west of Craighurst, Hwy 26 west of Midhurst, and heads west, through the Minesing Swamp to Hwy 90, where it ends after 50 kms. Trail Connects to Bruce Trail at Glen Huron and continues of 400 km south to Port Hope on Lake Ontario. The terrain is varied and is suitable for novices. Open year-round.

Unique 6,000 hectare wetland wilderness located west of Barrie in the heart of the Nottawasaga Valley. Featuring a diverse selection of plants and animals within a range of habitats including boreal and Carolinian forests. The 1 km Meadowmouse Trail begins at the info kiosk on George Johnston Rd. and offers views of the old Lake Algonquin shoreline that towers above, and forms the south-eastern boundary of the swamp. The short, well groomed route also traverses a large expanse of marsh habitat. The Mayer’s Marsh Trail can be reached via the Trans Canada Trail and travels a short jaunt alongside Willow Creek. 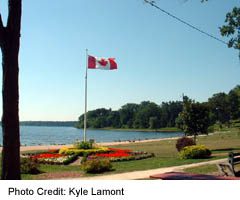 This 30 km trail starts 9 km west of Barrie, passes through Mayer’s Marsh, and ends at the Tiny Township line, just north of Elmvale. A visit to Fort Willow is just off of this trail as well. The section north of Anten Mills can also be used by horseback, snowmobiles (but no ATVs).

The Rotary Waterfront Park has 36.4 hectares of active and passive parkland connected by 3.2 kilometers
of lighted paved and limestone. Walkers, roller bladders, runners, cyclists and strollers
enjoy a picturesque view of Penetanguishene Bay, along a part of the /Transportation-Canada
Trail connecting the Township of Tiny with the Town of Midland.

22 km (14 miles) of multipurpose trail parallel to Simcoe County Road. 6, with access from Concession 8, 9, or at the end of County Road 26 in the Township of Penetanguishene. The Trail crosses rural meadows and agricultural and residential lands as well as going deeper into hardwood and mixed forest. The trail can be used for walking, hiking, bird watching, biking, and horseback riding, and in winter months for snowmobiling and cross-country skiing.

The Bruce Trail is one of the most popular trails in North America stretching 773 kilometres (480 miles) from Queenston Heights in the south to Tobermory at the northern end of the Bruce Peninsula. It follows the cliffs of the Niagara Escarpment (see Barrie Escarpment Commission), a ribbon of near wilderness running through one of the most populated parts of the country, creating a vital natural link for plants, animals and birds. The Bruce Trail is rugged in places and is punctuated by waterfalls cascading over steep dolostone cliffs. The Trail also connects picturesque villages, and historical sites. In recognition of its international importance as an ecosystem and its exceptional scenic beauty, the Barrie Escarpment Reserve was named a World Biosphere Reserve in 1990 by UNESCO.

The Trail is marked with white blazes; that is, white rectangles that are approximately 6 inches (15 centimetres) high and 2 inches (5 centimetres) wide have been painted on trees, fence posts, and rocks, A turn is indicated by a pair of blazes, one above the other, with the upper one offset in the direction of the turn. In the Barrie area, there are numerous side trails that lead to various points of interest. These are also marked, but with blue or yellow blazes.

A detailed guide book to the Trail is available from the Bruce Trail Association.
For more information on the Bruce Trail, please visit their official site

– Huntsville
Access: near the corner of Hwy 60 and Fairy view Drive, or by using the temporary entrance across from Muskoka Rd. #23.
This paved 3.4 km all season trail traveling through fields, forests, and wetlands,
suitable for all types of non-motroized recreational activity.

– Huntsville
Turn south off Main Street West (away from the lake), and continue to Townline Road, keeping right onto the Yonge Street Extension. Park at turnaround area.
The Yonge Street Trail is a natural ground trail that wends its way through mature forest starting at the west end of town.
The trail takes about 30 minutes to walk or 10 minutes to bike ride. Please remain on the trail as private lands border the trail.
For a challenging bike route loop, take the Yonge Street Trail to Chub Lake Road, North Mary Lake Road, Brunel Road, West Brown’s Road, East Brown’s Road, and then Canal Road. The loop can be completed back to town by using the Fairy Vista Trail, which is on the other side of Highway 60 from Canal Road; or by using the same back roads to either Brunel Road or Yonge Street back to Main Street West.

– Huntsville
Access: Centre Street Bridge beside KWH Pipe or at at Avery Beach Park
This 3.8 kilometre is great for walking, running, cycling and is part of the 52 kilometres of Trans Canada Trail through Huntsville.
The trail is easy to moderate in level of difficulty. The trail runs along beside the river, under the railway trestle, along the east side of Hunter’s Bay, through Avery Beach Park,
and onwards to the Highway 11 corridor. A 137 metre (450 ft) section of the trail floats on Hunters Bay, a great place for swimming,
fishing, boating or walking. Small pull-offs along the trailgive scenic breaks, notably Orchard Park
at the southern tip of the bay, with views down the full length of the bay, and Avery Beach Park on the lake side of Yonge Street,
which has a swimming area, volleyball sand court, dock, and boat launch ramp.

– Huntsville
This Route connects the Fairy Vista Trail at Fairy view Drive. Signs guide cyclists along
Highview Drive, Chaffey Township Road, Muskoka Road. #3, Golf Course Road, Earl’s Road, and back to Chaffey Township Road.
You can to into town by following Shay Road, then Chaffey Street to Main Street.
On another route (as yet un-signed), Williamsport Road connects with Muskoka Road #3 and travels to Dyers Memorial via a turn-off
at the corner by the old schoolhouse.

This 61 kilometre trail follows the former route of the Grand Trunk Railway, extends from highway 400 eastward to Elmsdale at Highway 11. The Trail is flat and hard-packed, making it ideal for snowmobiles, snowshoe’s, ATV’s, bicycles and hikers alike. The trail crosses various creeks and rivers, carving through the glacier-carved granite of the Canadian Shield and passing the abandoned “ghost towns of Swords and Orrville

This 2.8 km winter Nordic trail and summer hiking trail provides access to the unspoiled McCrae Lake Wilderness Area, which has no commercial development at all. The Trail winds its way to the Crow’s Nest Lookout atop a 100-foot granite cliff, with a view of the untarnished waters of McCrae Lake.

Champagne Street in old Parry Harbour, to the Salt Docks on Marion Avenue

5 kilometres of well-maintained pathways along the spectacular shoreline of Parry Sound, the trail provides stunning views of the archetypal Georgian Bay landscape. The trail has five fitness stations for runners & cyclists spread along its length, as well as picnic tables and benches and two beaches. North of the town’s Salt Dock Wharf, there is a more rugged 2.5 kilometres of the North Shore Rugged Hiking Trail, for avid hikers only.

The Old Nipissing Road, once an 1800s pioneer trail, now guides hikers and cyclists past pioneers’ towns and homes. The 120 kilometre Old Nipissing Road traverses the Parry Sound District between highways 69 and 11 – is a recreational trail. The trail officially starts in Rosseau, but may be accessed at cross highway including: 141, 518, 520, 124, 522, or 534. The Old Nipissing Road ranges in quality from bush trail to paved highway and everything in between, so it is suitable for cycling, hiking or ATVing.

Cycling Trail – Killbear has a 7 kilometre bike trail that starts at the park’s entrance and ends at Lighthouse Point, and is 3 metres wide the entire length.
Trails can be used by campers, provincial park seasonal pass holders and visitors.

230 km of well-kept, user-friendly trails connect Killbear and Algonquin parks, and are ideal for hiking, ATVing, cycling, and horse-back riding in the summer, as well as snowmobiling, and cross-country skiing in the winter. It also forms part of the /Transportation-Canada Trail system. The trail passes wetlands (including marshes, swamps, fens, and bogs) as well as forests, lakes, and rivers that cut across its dominant feature: the Canadian Shield.You might see such rarities as the Red-Shouldered Hawk, the Common Map Turtle, or the Eastern Massasauga Rattlesnake, and such common animals like the Moose. The trail follows the route of the late 1890s Ottawa, Arnprior & Parry Sound Railway, which became disused in the 1950s.

Enjoy day-tripping along the picturesque shores of Georgian Bay from Moon River to Parry Sound through Massassauga Provincial Park, including a visit Calhoun Lodge for a glimpse of 1930’s cottage life.
The park boasts three trails, the shortest being: