What to See & Do in Hamilton?

Hamilton is bisected by the Niagara Escarpment, with lake views and parks on top (“the Mountain”) and great lakefront action and attractions below. There are beaches and attractions close to the Skyway connecting to Burlington. The harbour is a showcase of heavy industry and steel manufacturing that made Hamilton the city it now is. Just to the east are Stoney Creek (site of War of 1812 battles) and the Niagara Wine Country.

Nestled in the heart of the “Golden Horseshoe” against the Niagara Escarpment, Hamilton has a population of 322,000 people, making it the ninth biggest city in Canada. Hamilton’s climate sitting on a bay at the western end of Lake Ontario is generally continental (warm summers and cold winters) and is influenced by its proximity to the Great Lakes.

The escarpment that rises above Hamilton shelters the lower part of the city from warm southerly winds, making the downtown cooler than the south end on the escarpment. The area above the escarpment is know as Hamilton Mountain. 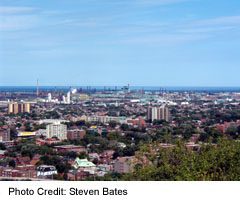 The city has long been known as a Steel Town, supplying steel for the automobile manufacturing sector centred around Toronto. Stelco and Dofasco remain the two largest private-sector employers in the city.

Over the past 20 years, the city has been working on a program of “greening” the city to improve the quality of life for its residents. The Bruce Trail today spans 776 kilometres from Queenston to Tobermory on the Bruce Peninsula, including 10 kilometres in Hamilton. The city is also home to the Royal Botanical Gardens and Iroquoia Heights Conservation Area.

The city is equally close to Toronto and the US border at Queenston, making it convenient for industry and travellers alike. This very location also made it the location of a famous and important battle in the War of 1812 at nearby Stoney Creek. There is a lot of history in and around Hamilton.

Hamilton has three major areas: along the lake (between Downtown, the steel mills and Stoney Creek) are older homes, on The Mountain, atop the Niagara Escarpment with its great vistas are more recently built homes (with the most recently built homes edging closer to Hamilton’s airport), and in the mixed urban-rural communities of Dundas, Ancaster, and Flamborough to the northwest.

There are also a number of nearby bedroom communities to the south, stretching from Hope to Brantford south to Dunnville on Lake Erie.

There are also nearby communities in the Niagara Region. And if you are a fan of the Hamilton Spectator newspaper, you might also include Burlington & Oakville in the Halton Region in this marketplace.