Things YOU GOTTA SEE when visiting Ottawa and the Ottawa Valley

Here are some quick suggestions for visitors with limited time in the area. Perfect if you have only ONE DAY to visit (like a business trip, when passing through, or when stopping over between flights). The additional days schedule is a recommendation for those who want to see the essence of Ottawa-Gatineau in only a couple of days.

You can read ALL SORTS of travel guides, and carry around pounds of paper, or just print off this ONE PAGE and have all the info you ever need! These are the area’s top activities, family activities and attractions, tourist attractions, historical sites, museums, interesting architecture, sightseeing and top shopping/dining areas. Organized into a nice walking or driving itinerary!

Ottawa is the nation’s capital on the Ontario side of the River, and is bisected by the Rideau River and the Rideau Canal, which provide a navigable connection to Lake Ontario. Gatineau is on the Quebec side and is home to many government offices, and is home to the rugged Gatineau River and scenic Gatineau Park. Head west from Ottawa along Highway 17 to see the many 1century old small towns in the Ottawa Valley.

To capture the essence of this city, here are suggestions for your first day (especially if its your only day) in Ottawa.

Start your day in the Byward Market, taking in the heritage buildings, grabbing breakfast, visiting the weekend Farmers’ Market, and shopping at the many stores and boutiques

Continue along Rideau Street, on the north side are the Chateau Laurier, and the Ottawa Locks. On the south side of Rideau (which turns into Wellington) are walking past Rideau Centre, Conference Centre, and just past that the glass-covered Convention Centre. Then cross the bridge over the Rideau Canal the War Memorial and National Arts Centre.

Go to the War Memorial, and then head west on the Sparks Street Mall, enjoying the heritage buildings and the many interesting shops and services

Parliament Hill. Catch the Changing of the Guards at 10 am, take a tour, or just take a walk around the grounds to view the Peace Flame, all the statues, and the and take in the panoramic river view from behind the Parliamentary Library. 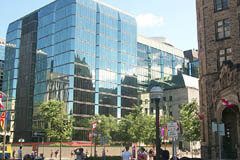 Just beyond all the buildings, and before the bridge over the Ottawa River’s Chaudiere Falls, is the National War Museum. There are exhibits of Canada’s military history including the Boer War, WWI, WWI, Afghanistan, and its many significant peacekeeping missions around the globe. After touring the museum, take a walk up the long ramp to the rooftop (to remind you of troops trudging through trenches), where you have great views of the Ottawa River and the parliament Buildings.

Cross the River at du Portage Bridge. See the Ottawa River Parkway to the west, pass the old mill (now a restaurant), the Aboriginal Experience on Victoria Island, various government office buildings, and wander around old Hull (this is also a nightlife hotspot, for later)

Visit the Museum of History (formerly the Museum of Civilization), with its curvey lines designed by architect Joseph Cardinal, on the shore of the Ottawa River below Parliament Hill. If there’s only ONE Museum you can visit on your stay in Ottawa, this is it.

Cross the Interprovincial Bridge back to Ottawa, ending up on Sussex Boulevard. Here you can see Nepean Point, with its statue of Samuel de Champlain, the National Gallery, and the Royal Canadian Mint. Break for a bit in the Byward Market

If you are visiting for a longer period, there are a number of destinations worth visiting

In the city’s east end, in Rockcliffe, take in the National Aeronautical Museum in Rockcliffe and the natural splendour of the unique Mer Bleue Conservation Area.

On the way back into downtown, visit Rideau Falls, 24 Sussex (home of the Prime Minister) and across the street Rideau Hall (home of the Governor General), and check out the other posh homes of Rockcliffe Park.

Head back across to Ontario, via the Champlain Bridge to the Ottawa River Parkway back into downtown. 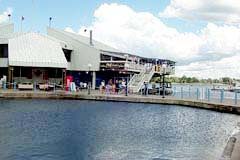 Enjoy the parklands of the city, driving along Queen Elizabeth Drive from the National Arts Centre (access is off Laurier Street), along the pretty Rideau Canal past Patterson Creek, Lansdowne Park, the Bank Street shopping district, ending at ,strong>Dow’s Lake, a year-round play area in the middle of the city.

Explore the city’s south end, from Dow’s Lake, drive up Prince of Wales Drive past the Arboretum & the Agriculture Museum to visit Mooney’s Bay and Hog’s Back Falls.

Head back in on Colonel By Drive, which passes the campus of Carleton University, Rideau Canal Locks, Dow’s Lake, and Ottawa University, ending up downtown again.

From downtown, head west on the Ottawa River Parkway to Island Park Drive, and from Dow’s Lake head west on Carling to Island Park Drive, and head straight across the Champlain Bridge which crosses the Ottawa River (you can stop on the island in middle and view the Champlain Rapids, that challenged fur-traders in their canoes 400 years ago). Then heading east toward Hull, to the Gatineau Parkway. 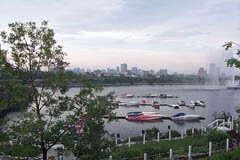 Take the Gatineau Hills Parkway, up past Pinks Lake (a now water-filled former gravel pit), tour the 123 hectare The Mackenzie King Estate with its statues and ruins. Then head to the very end of the road to view the Ottawa Valley from the Belvedere Lookout (“belvedere” is French for lookout, so though it looks like he name of the lookout its actual a bilingual reference).

On the way back, visit the Casino de Lac Leamy, the quiet Gatineau River, the pretty Quebec town of Gatineau and the Leamy Lake Archeological and Environmental Preserve (there’s also a popular public beach on the lake!).

To head up the Ottawa Valley, you can do it quickly, or do it leisurely. We recommend the leisurely approach, and you can always hurry back view Highway 17 & the Queensway, after dark. 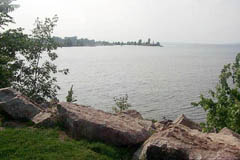 Head further west to Kanata, Canada’s tech capital. You’ll recognize many of the names on glass buildings…. get on the Queensway #417 West.

About where the end of the “twinned” section of 417 is Arnprior and a bridge crossing the Mississippi River, with a power dam to the west of the 417. Arnprior is a pretty little town and worth a day trip by itself 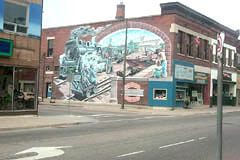 But you can keep heading west to Pembroke, which is site of Canada’s first hydro dam, visible from the riverfront Main Street which also has a number of murals on display.

Next major town on the way is Petawawa, home to the Canadian Forces Base Petawawa, and Canada’s Special Forces. The telephone poles alongside the highway are very low to the ground, to allow artillery to fire over the highway in training. 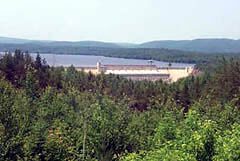 West of Petawawa is the Des Joachims dam at Rolphton, with a great lookout to view the dam from below. Then you pass Chalk River. There is a nuclear research facility (which makes most radioactive medical isotopes for the country, but since 9/11, they have cut back on public tours of the facilities and the reactors. 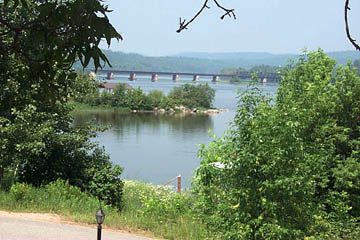 Next stop is Mattawa, a town at the junction of the Ottawa River and the Mattawa River. This is where French fur traders (courier du bois) turned west to head to Lake Nippissing (passing North Bay), the French River and the Upper Great Lakes (and some turned south at Chicago, to reach the mouth of the Mississippi River at New Orleans four centuries ago. Today, the Trans-Canada Highway heads west here to North Bay, Sudbury, Sault Ste Marie, and Thunder Bay.

In Mattawa you can take steam train excursions, or dine on the patio at Valois Restaurant overlooking the broad expanse of the Ottawa River.

We and our partners use cookies to better understand your needs, improve performance and provide you with personalised content and advertisements. To allow us to provide a better and more tailored experience please click "OK" Privacy policyOkNo