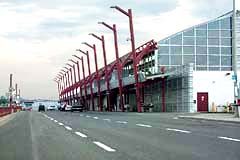 Thunder Bay International Airport, or “YQT” (its international aeronautical designation) is a major airport for northern Ontario. The terminal is southwest of downtown, just past Thunder Bay Expressway and Arthur. It is accessible from the Transportation-Canada Highway, and is only minutes for the city’s south downtown.

The airport is serviced by the major Canadian airlines, and is a major jumping off point for smaller airlines’ flights into Ontario’s northern mining country, and for float planes to take off into lake country,famous with fishermen from around the world.