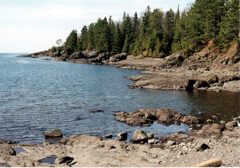 The rocks that form the Canadian Shield were formed about four billion years ago during the Archeon Eon of the Precambrian Era. Erosion of
this extremely rugged, mountainous landscape deposited enormous quantities of clays, silts, sands and gravels into the surrounding
waters. Compressed by their sheer cumulative weight and the heat of the shifting Earth’s crust, sedimentary and metamorphic rocks formed during
the Proterozoic Eon of the Precambrian Era.

More recent rocks that were formed above these ancient layers have since been largely removed by the scouring action of glaciers that covered
northern North America in the several ice ages in the past 100,000 years. 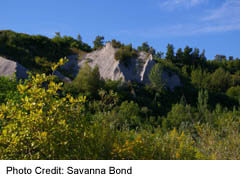 The last ice age scraped the rocks in a NNE (north-north-east) to SSE (south-south-east) direction. At the end of the last ice age, all the
waters in central Ontario (and the great lakes) drained to the east, toward the St Lawrence River. After the weight of the glaciers left this
area, the land slowly began to rise.

During the last Ice Age, much of Toronto was covered by Glacial Lake Iroquois, with a series of steep escarpments marking the lake’s former shoreline. Thses are most noticeable in three areas: along the current lakeshore at the Scarborough Bluffs, most prominent between Victoria Park Avenue to Highland Creek, and near St. Clair Avenue West between Bathurst Street and the Don River, and north of Davenport Road (around Casa Loma). Although not remarkably hilly, The city has a 200 metre (640 ft) elevation drop from Steles Ave in the north to Lake Ontario, and over the last 10,000 years erosion has created a number of steep banked ravines along the city’s waterways. 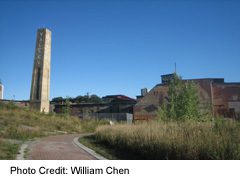 North of Toronto, between Whitchurch-Stouffville and Aurora is the Oak Ridges Moraine, formed by sediments dropped by the glaciers about 14,000 years ago. Today, the moraine has gently rolling landscape, low hills, kettle lakes, kettle bogs and wide river valleys. Even today, about 30% of its area remains forested, and the Oak Ridges Moraine offers refuge for forest birds as well as significant flora and fauna and is a significant wildlife corridor in well-populated Southern Ontario.

Archaeological evidence shows that native peoples had hunting camps and small villages along the Credit and Humber river valleys since 8000 B.C.

At the time of European contact in 1615, both Iroquoian and Algonquian-speaking peoples inhabited this area, but by 1700, an Ojibwa (Anishnabe) group known as the Mississaugas had moved south from Lake Huron and had driven the Iroquois south of Lake Ontario. The name “Mississauga” is believed to mean “river of the north of many mouths,” referring to a river of that name in Northern Ontario which drains into Lake Huron.

The first European to visit the area was the French explorer and fur trader Cavelier de la Salle and Louis Joliet, who arrived at nearby Burlington Bay in 1669 via the Grand River from Lake Erie on their return from Lake Superior. In the 1720s, the French established trading posts around Lake Ontario, including one near the mouth of the Credit River, named for the custom of trading with the Mississaugas on credit.

Early Settlement to War of 1812 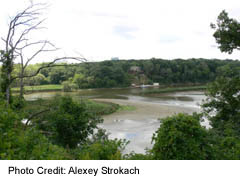 Iroquois tribes occupied the region for centuries before 1500, but by the time Europeans first arrived at present-day Toronto, the Hurons had pushed them south into upstate New York and Pennsylvania. The first Nations long ago discovered the shortest route between Lake Ontario and Lake Simcoe to Lake Huron goes up the Humber River, portage across the Oak Ridges Moraine and then head down the Holland River to what is now Lake Simcoe. This route was followed (in north to south direction) by Samuel de Champlain in 1615.

The name Toronto is believe to come from the Iroquois word tkaronto, which means “place where trees stand in the water”, though referring to the northern end of Lake Simcoe, where the Huron had planted tree saplings in the shallows to corral fish. The Indian portage route from Lake Ontario to Lake Huron passed through this point, and became known as the Toronto Carrying-Place Trail, which led to its starting point being called “Toronto”. 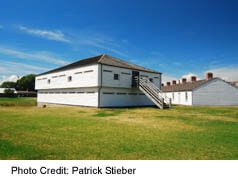 In 1750, French traders founded Fort Rouillé at the current Exhibition grounds, but was abandoned after the defeat of the French at the Plains of Abraham. The British established the Colony of Upper Canada, so named because it was upstream on the St Lawrence River from French-speaking Lower Canada (now Quebec). In 1787, the British negotiated the Toronto Purchase with the Mississaugas of New Credit, thereby securing more than a quarter million acres (1000 km²) of land for settlement in the Toronto area. Following the American Revolutionary War, United Empire Loyalists fled for unsettled lands in Upper Canada.

In 1793, Governor John Graves Simcoe established the town of York, named for Prince Frederick, Duke of York and Albany. Simcoe chose the location, believing the new site would be less vulnerable to attack by the Americans, and constructed Fort York at the entrance of the town’s natural harbour, which was sheltered by a long sand-bar peninsula (formed by sand and gravel eroded from the Scarborough Bluffs being pushed westward by the lake’s currents). The settlement was clustered at the eastern end of the harbour behind the peninsula, today roughly Parliament Street & Front Street. Unfortunately, in 1813, and American invading force captured, plundered, and burnt down much of the city in the Battle of York during their five-day occupation.

After the War of 1812, the number of immigrants from Great Britain and Ireland steadily increased, with modest folks settling in the south. Georgina, in the north of York Township, attracted retired military officers who were veterans of the Napoleonic Wars and the War of 1812, was well as aristocratic families, wealthy merchants and English landholders who built stately manors and manicured estates. As more settlers came to York Township, water-driven grist (grain) and lumber mills were built along major waterways and became the basis for major population clusters. Richmond Hill was prosperous because it was mid-way stagecoach stop on Yonge Street between Toronto and Holland Landing.

Newmarket was a focal point of discontent against the governing Family Compact, which was said “were robbing the country”. The general election in 1836, in which the new “Constitutional Reform Party of Upper Canada” was defeated, leaving settlers’ grievances unaddressed, led to the Rebellion of 1837. The rebellion was quickly crushed and William Lyon MacKenzie fled to asylum in the United States. Samuel Lount from the Newmarket area and another participant in the uprising were hung. 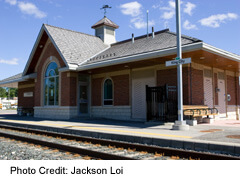 Robert Simpson started out in Newmarket as a 22-year-old shop boy in a Main St. general store and in 1858 went on to found and build of one of Canada’s greatest retail empires, based in Toronto.

From 1850 to 1900, the construction and expansion of the railways brought York Region accessibility to Toronto and points beyond, and focused development along the rail lines, causing some smaller industries to disappear, and other — now with access to larger markets — to thrive.

In 1853, the Ontario, Huron & Simcoe Railway (Ontario’s first) arrived in Aurora and Newmarket which eventually linked Toronto to Collingwood on Georgian Bay. In 1871, the Toronto and Nipissing Railway passed through Markham, which in 1877 connected to Stouffville. The Metropolitan Radial Railway reached Thornhill in 1896, allowing commuters to travel to and from Toronto. In 1902, Newmarket had an Electric Railway connecting south to Toronto, which was extended north to Jackson’s Point in 1906.

Development in the 1900s

In 1912 five huge greenhouses were built in Richmond Hill to become the centre of Canada’s commercial rose-growing industry.

Holland Marsh has 2900 hectares (7,200 acres) of organic/muck soil, drained by the Holland River. In 1925 28 km of dikes were built to drain the marshlands that lie 8 feet below the level of Lake Simcoe. By the early 1930s, 18 Dutch families came to the marsh and began building a prosperous agricultural community. The marsh today is a market garden for the Ontario and foreign markets, producing carrots and onions, and smaller amounts of lettuce, potatoes, celery, parsnips, cabbage, cauliflower and beets. The 1990s added a demand for Asian greens and bok choy.

Following the Second World War, refugees from war-torn Europe, poor areas of Italy and Portugal, and Chinese fleeing the unrest there came to Toronto. When race-based immigration policies were reformed in the late 1960s, immigration grew from all parts of the world. Toronto’s population was 1 million in 1951, when Toronto began expanding into the suburbs in all directions. The city doubled to two million by 1971, and by the 1980s, Toronto had outgrown Montreal to become Canada’s most populous city. During this time political uncertainty, and onerous French language laws prompted many national and multinational corporations to move their head offices from Montreal to Toronto.

Toronto’s northern suburbs began to grow significantly in the 1960s, after the land south of Steeles Avenue was built out. Thornhill became a popular bedroom community for those working in Toronto, and this process continued hop-scotching its way north to Vaughan, Markham, and Richmond Hill. As the TTC Subway pushed ever-further north on the Yonge leg or the University-Davenport leg, commuting times were brought down. The introduction of Viva rapid transit lines by York Region Transit connected major population centres with the ends of the subway lines, reducing the need for an auto-focused commuter culture.

The growth has been so substantial highways were rapidly expanded in the region. Highway 400 between Toronto and Barrie was expanded to 4 lanes and recently to 8 (or more!). The Don Valley Parkway was continued north of the 401 as Highway 404, now continuing north as far as Newmarket. The amount of east-west traffic on the 401 has created a need for the recently-built 407 ERT toll highway which allowed truck traffic to by-pass Toronto and made York Region quickly accessible .to auto manufacturing plants east, west and north of Toronto.