This 276000 population community is the result of a 1975 merger of seven area municipalities (Hull, Tourraine, Templeton, Templeton-Est, Gatineau, Pointe-Gatineau and Cantley), making it the fifth largest in Quebec. Th oldest church in the region, St-Francoise-de-Sales, is at the confluence of the Gatineau and Ottawa Rivers. Town attractions include the very natural Lac-Beauchamp Park and the year-round Municipal Arts Centre (Maison de la Culture). Each Labour Day, the community hosts the Gatineau Hot Air Balloon Festival.

The town is named for Nicolas Gatineau, Sieur dis DuPlessis, who was born in France in 1627 and began as a fur trader between the Ottawa and the Saint-Maurice rivers. He was a notary and a clerk in the Montreal and Trois-Rivieres courts, and came to the region as a corporate clerk, and made money with banking. He died in 1681, drowning in the river which now bears his name.

In 2002,  the provincial government merged the cities of Hull, Gatineau, Aylmer, Buckingham and Masson-Angers into one city. Although Hull was the oldest and most central of the merged cities, the name Gatineau was chosen for the new city. The main reasons given were that Gatineau had more inhabitants 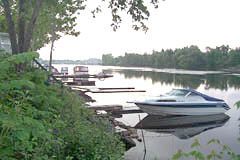 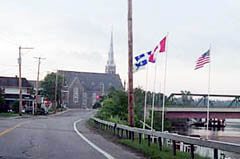 This hydro-electric power station offers guided tours to see the facilities, understand electricity and see the scope of the current rebuilding project. Open mid-May to late June with 75 minute tours weekdays at 9 am , 10:30 am, noon, 1:30 pm, and 3 pm. End of June to Labour Day open Wednesday to Sunday with tours at 9 am, 11 am 12:30 pm, 2 pm and 3:30 pm. Admission free, with reservations required for groups of 10 or more.