Downtown is both the cosmopolitan heart of Montréal with its postmodern towers, surrounding Victorian architecture, and splendid churches, museums and green spaces dot the area. And all this right close by to great shopping and electric nightlife on Crescent Street.

Montreal is famous for its wide range of international boutiques, and with Canada’s low dollar its especially attractive for Americans to shop here. The original segment of the Underground City lies below Place Ville-Marie sits above. The “city” now links many major buildings and multi-level shopping malls in the downtown and is a shopper’s paradise year round. East of the McGill metro station the “city” extends from Place-des-Arts down past Complexe Desjardins. Another series of passageways extends the existing network to include a quadrant in the new Quartier international.

More than 500,000 people pass through the underground city every day, on their way to work, university or to scope out bargains at the over 1,680 boutiques and businesses. The many passageways also serve a more leisurely purpose; connecting certain métro stations, the underground provides access to about 40 theatres, cinemas and other entertainment venues, as well as restaurants, tourist attractions and museums. 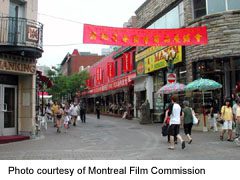 In the 1860s Chinese immigrants came to Canada to work in the mines and on the railroads. They settled downtown, mainly along de La Gauchetière Street near Saint-Laurent Boulevard. Over the years, the Chinese residents have settled all around Montreal , but the area has retained its Asian flavour and the Chinese community continues to shop and celebrate traditional festivals and holidays here. Sun Yat-Sen (Clark at de La Gauchetière street) honours the philosopher and political figure seen as the father of modern China, and you can see large arches at the entrance to the district and the pagodas on the Holiday Inn Select..

The 1826 Wing building (corner de La Gauchetière at Côté) houses a fortune-cookie manufacturer. The first Chinese laundry was established in 1877 on the corner of Saint-Antoine and Jeanne-Mance Streets, followed by the first grocery, the Sun Ling Lung market (72A de La Gauchetière Street). The Holy Spirit Chinese Catholic mission building (205 de La Gauchetière Street West) is designated a historical monument and contains a remarkable Oriental painting of the stations of the cross, drawn by a Chinese artist and his son.

at the intersection of Beaver Hall Hill and McGill Streets

The world headquarters of the International Civil Aviation Organization (ICAO), a specialized agency of the United Nations, is here in Montreal. The complex features a 15-storey office tower, a five-storey conference centre, and a six-storey sky-lit atrium. Outside the Atrium entrance is a sculpture by the Québec artist Marcelle Ferron entitled “Le Miroir aux alouettes”.

The Museum Quarter radiates out from the Montreal Museum of Fine Arts and is the heart of the city’s cultural life. The area’s historical and architectural richness spills into surrounding streets, with Crescent, de la Montagne and Sherbrooke Streets are the hub of the district’s vibrant business life. Also adjoining the district are high-end, designer fashion and décor boutiques, international shops, art galleries, jewellers and exquisite fine dining.

This tiny park close to Sainte-Catherine Street’s major department stores features a monument to Edward VII. The park is named after its donor, Thomas Phillips, in 1840. The first downtown stores were located around this Square, which is still home to the famous 1864 Birks jewellery store, and The Bay department store, originally called the Hudson’s Bay Company which was founded over 330 years ago by British fur trappers. 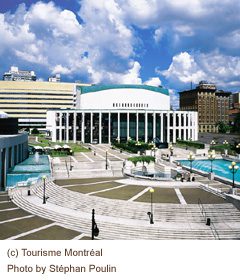 This building is “ground zero” for downtown business and shopping, with its innovative 1950s office tower atop the Place Ville Marie shopping centre with over 80 elegant boutiques, restaurants and services including the famous Restaurant Marché Mövenpick. Consisting of several towers, Place Ville Marie features a cruciform design recalling the religious vocation of this city, which was originally dedicated to the Blessed Virgin. Open: Monday to Wednesday, 9:30 a.m. to 6 p.m.; Thursday and Friday, 9:30 a.m. to 9 p.m.; Saturday, 9:30 a.m. to 5 p.m.; Sunday, noon to 5 p.m.

This new urban space has emerged from the quadrant lost to the 1960s construction of the Autoroute Ville-Marie. This east-west expressway was partially covered with tree-lined parks and public spaces, called the Quartier international to form a transition between the bustling, modern downtown and the quieter historical city. “La Joute” (The Joust), a work by celebrated artist Jean-Paul Riopelle, will be the crowning piece in a new public space named in his honour, following his death in 2001. Place Riopelle will face the newly renovated Palais des congrès (convention centre). Those arriving by metro at Square-Victoria will see that station’s authentic Parisian Metro grille presented prior to the Expo 67 World’s Fair. 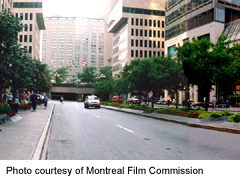 McGill College Avenue is often called the little “Champ Élysées Avenue” resembling the grand tree-lined boulevard of Paris. From the terrace at Place Ville Marie the view northward provides a striking view of the main gates of McGill University and a great view of Mount Royal, along with a street ined with modern buildings and wide sidewalks for strolling and shipping..

Downtown has always been identified with Sainte-Catherine Street, Montréal’s renowned commercial thoroughfare which stretches east-west for 15 kilometres The street is lined with the major department stores, shops and restaurants that have been the pride of Montréal for more than a centur and is served by eight metro stations, with the green line running parallel to it.

Near Décarie Boulevard, west of downtown this street serves a mainly English-speaking clientele with its Victorian storefronts and British ambiance.