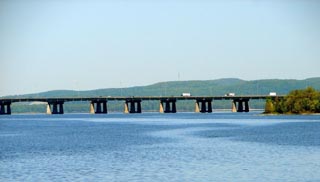 The first road link to Montreal was via the 1925 Galipeault Bridge and Taschereau Bridge, across the Ottawa River. In 1966, the 2 km long Île aux Tourtes Bridge was built to carry 6 lanes of Autoroute 40 over the Lake of Two Mountains. This bridge is the main link between Montreal and the province of Ontario, and connects Vaudreuil, on the western tip of the Island of Montreal, to Senneville and Vaudreuil-Dorion. 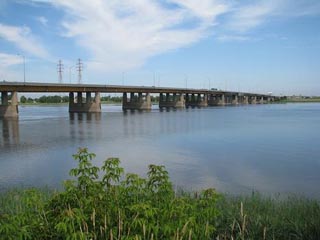 The Charles de Gaulle Bridge is a bridge that links the eastern tip of the island of Montreal, Quebec over the Rivière des Prairies to the Lanaudière region near the city of Charlemagne. The bridge is named after President of the Republic of France Charles de Gaulle who inspired the sovereignty movement in Quebec during the 1960s with his “Vive le Québec libre” speech in Montreal in 1967 the same year the bridge was built.

With three lanes of traffic in each direction, its the fastest link from the north shore to downtown Montreal, the road is often very congested during rush hours. The bridge is also used by Autoroute 40 for the fastest travel link between Montreal and the cities of Trois-Rivières and Quebec City, both located on the north shore of the Saint Lawrence River. 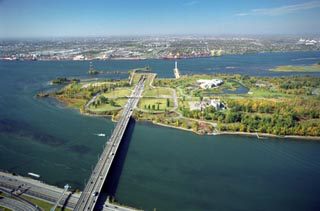 This tunnel & Bridge is used to carry the north-south Autoroute 25 across the St Lawrence. To avoid having to build a huge bridge over the St Lawrence main shipping channel, and the approach ramps, which would have used significant Montreal real estate, the engineers opted to build a 1,391 m (4,563.6 ft) long tunnel under the Saint Lawrence River. Named for the respected Lower Canada political reformer Louis-Hippolyte Lafontaine. The tunnel surfaces on Île Charron (Îles de Boucherville at entrance/exit #1 of Autoroute 25), then continues by bridge to Longueuil.

The Louis-Hippolyte Lafontaine Bridge-Tunnel (Pont-Tunnel Louis-Hippolyte-La Fontaine) is a Canadian highway bridge-tunnel running over and beneath the Saint Lawrence River. It connects the Island of Montreal with the south shore of the river at Longueuil, Quebec. The tunnel handles about 120,000 vehicles per day. 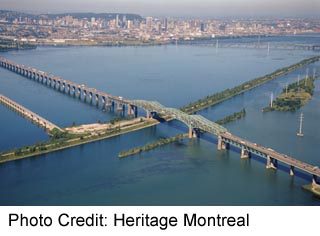 The Champlain Bridge (Pont Champlain) crosses the Saint Lawrence River and Saint Lawrence Seaway, and connects the Montreal boroughs of Verdun and Le Sud-Ouest to Brossard on the South Shore. The bridge varies traffic for Autoroutes10, 15, and 20. The bridge (including approaches at each end) is approximately 6 km (3.7 mi) long and the center main cantilevered span is 215 m (705 ft). The bridge carries six lanes of vehicle traffic; three in each direction, and handles about 135,000 vehicles a day

In October 2011, the federal government announced construction of a replacement bridge, in a plan that would take about 10 years. In 2016 construction began and will include a two-lane public transit corridor for either buses or light rail, a six lane corridor for vehicles, and a multi-use corridor for cyclists and pedestrians. Components of the 4 billion dollar project.