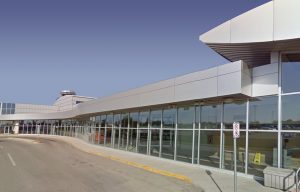 Saskatoon’s airport which is known as the John G Diefenbaker International Airport, or “YXE” (its international aeronautical designation) is located 5 km (about 10 minutes) from downtown. The airport is named for the Saskatchewan politician who served as Prime Minister of Canada from 1957-1963.

The airport is situated in the northwest, accessible from all parts of town via Circle Drive to Airport Drive. The Air Terminal Complex was built 1955, on an 827 hectare site.

The airport has 3 passenger bridges, 6 ground loading positions, 650 parking stalls. The airport has two runways, the largest being 2530 meters long. About 800,000 passengers use the airport annually, with approximately 260 weekly flights during winter months and 200 during the summer (including smaller aircraft, there are about 77,000 aircraft movements a year) Air cargo is handled with belly, freighter and integrator operations.

From the airport, the best way into town is by taxi (costing $10 to $12 to downtown) You can also rent-a-car (cost varies). If you are planning to stay in Saskatoon itself, everything is close together and a short walk from the core.

For those on a tight budget, you can (almost) take public transit: Catch the Saskatoon Transit bus #1 from downtown to McNab Park. This bus stops at the corner of Airport Dr & 45th Street, about 1/2 kilometre from the terminal. (This bus runs only during the daytime, from 6 am until 6:30 pm.)

We've been helping businesses reach their online audience since 1999.

Travel & tourism information for travellers across all provinces and all cities.

We have been providing Canadians and international visitors travel information about driving across (or around) this great country on the #1 Highway.
We are not government funded or directed in any way strong?, and are supported fully by website advertising.