Not far north of Toronto starts the rugged Canadian Shield, dotted with hills and crisp lakes. Head north and just past Barrie is Georgian Bay with its 30,000 islands and the towns of Midland and Pentanguishene, before heading north of the French Rive to Sudbury which is the eheart of Group of Seven 9the painters) country

Arrive at Toronto’s (1) Pearson International Airport, and head north on Highway 400, past the new suburbs of York Region and the fertile farmlands of the Holland Marsh. Once you go through Barrie, you’ll arrive at a section of Georgian Bay home to many cottagers. Explore the reconstructed 17th century Jesuit Mission at Sainte-Marie among the Hurons or the outdoor murals of Midland (2), or visit Ontario’s most picturesque marine heritage site, Discovery Harbour, in neighbouring Penetanguishene. 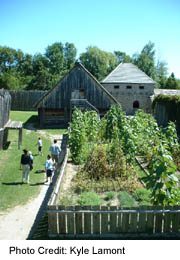 Travel north over the French River, the major fur-trading route between Montreal and the vast inland to the west continuing north to Sudbury (3), the nickel Capital of Canada. Here you can visit Science North, one of the most poplar attractions north of Toronto, the mines and smelters at Copper Cliff, and the A.Y. Jackson Lookout, a half-hour northwest of the downtown. 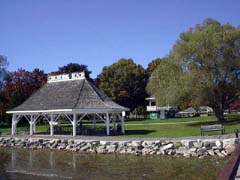 The next day, head east toward the expansive Lake Nippissing and the city of North Bay (4), the gateway to Ontario’s north. Even before the Trans-Canada Highway was built west, Highway 11 from Toronto to North Bay was extended during World War II to connect the mining towns of the north, all the way to Nipigon,  Thunder Bay, and Fort Frances in the very rugged northwest corner of Ontario.

From here, head south through Ontario’s rugged Canadian Shield to Huntsville (5) and the next day, drive through Bracebridge and Gravenhurst, towns that are all part of the fabulous Muskoka Region, with all its many lakes and festivals and array of outdoor activities. Summer in the Muskokas is a great time to get in some biking, golfing, fishing, and waterskiing, or try renting a jet ski.

It’s in this region where you’ll also find Algonquin Park, a wonderland of natural and cultural history. Next comes a visit to Orillia on the Trent-Severn Waterway which is now home to Casino Rama, a huge entertainment complex that is not only a casino, but a great concert venue.

From Orillia, you’ll then drive along beautiful Lake Simcoe, through the small city of Barrie to finish the day’s drive in Toronto, (6).

In Toronto, you can catch a Blue Jays baseball game, enjoy the panoramic views from the CN Tower, shop at the Eaton Center, dine in trendy Yorkville, or head out to the theatres or clubs in the Entertainment District.

Hit the road, then hit the dock. This is a route full of destinations for a perfect summer retreat. The whole family is having a great time relaxing together! – Tyler